Adventure Quest Worlds is a simple and fun browser-based MMO, perfect for quick play sessions. The game is great fun even when played for long periods of time, but the compact nature of the quest systems really lend to casual play. It’s easy to learn, intricate, content heavy, and charming. With only a few minor annoyances, it’s a nifty title that’s definitely worth looking into. 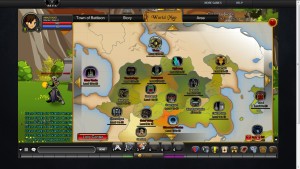 The storyline in AQW isn’t incredibly riveting, but rather the amount of tales there are to tell are quite a lot. A quick look at the quest tracker shows just how many individual stories are being told. Beyond the overarching plot, there’s good chunk of worlds with their own lore to be explored. The lore is interesting and well written, but I wish they would’ve told more through quests rather than dialogue. What’s most important to note is that AQW has quest lines for all sub-genres; the undead, medieval fantasy, magic wielding, etc. The story and content is well rounded, and there’s something here for everyone.

Something you’ll immediately notice when playing the game is the inclusion of fully animated cutscenes. These cutscenes are plentiful, well animated, and enjoyable to watch. The overall style of the game is cartoony, with a very big helping of charm. Almost every NPC bleeds personality, and the almost-bubbly charm of certain NPCs really left an impression on me. 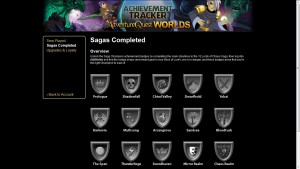 It shows that the story and presentation was crafted with passion. Especially considering just how much content there is, the attention to detail is commendable. The game does well graphically, but the real applause in presentation should be given to the style and charm. The 2.5D style really lends itself well to this kind of genre, which took me by surprise.

The audio sits just above functional, delivering some nice scores but lacking a punch in the sound effects. Hearing the same few effects in repetition does get old, and a little more variation would’ve been nice. The level based or world based themes do sound nice, and are varied. It’s the majority of combat based audio that falls flat. Beyond that, everything else is functional and fine.

The menu systems in the game can be confusing or very straightforward, depending on what you’re looking at. Equipping items and viewing your inventory is simple. Looking at current quests is also simple; it’s finding where those quests are located that’s the problem. The game has an expansive map, filled with many cities, locales, and sub-floors. There was rarely a clear indication on where I needed to go, and it was hard to tell main quest lines apart from side quests. The “story” tab in the menu does show how many quests you’ve completed for a specific story line, but it doesn’t tell you which quests. This can lead to a problem if you take a break from the game and forget what you were doing. 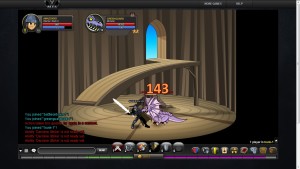 Fortunately, all these systems are backed by a simple combat system that is fun and rewarding. In fact, a lot of the quests fall back on combat, which seems to be the main focus of the game. There doesn’t seem to be any super deep crafting or simple distractions (beyond maintaining and upgrading a personal home). Instead, the game focuses much on character progression, skills, damage output, etc.

A plethora of shops exist around every corner, some of which can only be visited if you are good or evil. There are some shops that are class specific, alliance specific, or level specific. The ability to enhance weapons is also interesting, and really shows how deep the combat systems go.

While the gameplay is arguably simple, it’s not simple in a bad way. In fact, the “pick up and play” style of the game combined with the constant rewards area always beckoning you back. The quick “click and hot key” combat is a staple of the genre, but is done well here. The combat is the glue that holds everything else together.

As previously mentioned, the game has some awesome inclusions of alliances, good vs evil, and class bases. Beyond your standard rogue, warrior, mage, etc, you have specific alliances you can join with (providing you with rarer and more powerful gear). A lot of these alliances have special classes, which are detailed in the lore too. The inclusion of achievements and badges are excellent, and give you even more incentive to play. 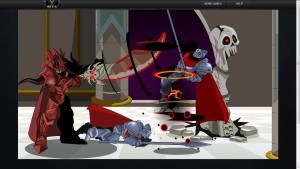 Finally, being a free-to-play browser game comes with micro transactions. Thankfully, AQW keeps them relatively simple. Items that can only be bought with a paid account or real money are marked with a gold text. This makes it easy to digest and simple to understand. There’s plenty of content for free accounts, so by the time you reach the paid content, you’ll know if you like the game enough to spend real cash. The paid content is also not pushed in your face, which is greatly appreciated and refreshing for a free-to-play MMO.

Adventure Quest Worlds is a rewarding and simple game that is charming and fun to play. It doesn’t require a lot of time dedication, and is easily playable in small chunks. Quests usually only last a couple of minutes, and leveling comes quickly, and rewards are often and plentiful. Quest locations can get a bit confusing at times, but beyond that, the game is incredibly well done. Adventure Quest Worlds is definitely worth checking out, as you can tell by the community; the game has legs. There’s a reason people play this game for years on end, it’s tons of fun.