Clash of Avatars (CoA) launched its open beta on January 19th 2016. It is a fantasy browser-based MMORPG with 3D graphics that supposedly has fun dancing features.

Well, first of all, let’s get the dancing thing out of the way. For some reason, I thought dancing would be a central theme of the MMORPG.

Check out this screenshot of my character dancing (picture on the right). It’s like an emote you can do when you are going to be away from your keyboard.

You get a small amount of experience when dancing and it looks cool. Apart from that, it’s cool but nothing earth-shatteringly great but I did enjoy it.

With that out of the way, let us proceed with the review.

There are three classes in Clash of Avatars – warrior, mage, and summoner. Thankfully, each class does have both a male and female character that you can create. I choose the female mage.

I would have liked it better if there were more options but I have to admit that this is pretty standard for browser-based MMORPGs. They do normally have only a few classes with none or very few customization options so everyone starts off with the same stats and look.

That’s okay. At least they don’t have gender-locked classes.

After the character creation screen you can start playing the game right away on your browser.

The first thing you do in the game is to talk to this character. Apparently, your story is that you want to become a warrior. Er, apart from that I was not able to find out much about my character’s in-game background story.

Right after I talked to that girl, I suddenly started fighting something.

“Whoa, what’s this?” was my reaction since I had not even clicked on any enemies or skills. But… no, no, it seems that all you have to do is to click on the quest text and everything else is automated.

What the heck, are you serious, Clash of Avatars???

This is the core mechanic of the Clash of Avatars quest system. You just click on the quest text and everything else is done for you. It’s a very strange feeling to be playing a female mage in an MMORPG but not being able to control her. It created a disconnect between me as the player and my immersion in the game. I mean, I didn’t even walk her (my mage) around the map, she just moves around on her own. She also uses skills on her own without any input from me.

When this happened, I wasn’t sure if I wanted to continue playing or not. I mean, is it even worth it if just watch your character as she independently completes quests?

I was not happy at all at this point but I decided to relax and just let my girl continue doing her quests while I watched. 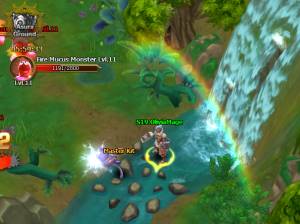 As I continued playing I did find some good things about Clash of Avatars. The graphics are surprisingly good. The world is bright and colorful. I was particularly pleased with this rainbow and waterfall spot (in the picture above).

At least, if I do decide to play, the game is pleasing to the eye.

I also very much liked the mob and character design. They are cute in a charming way. I am huge a fan of cute designs. Personally, I like MMORPGs that are bright and fun, not dark and grim. 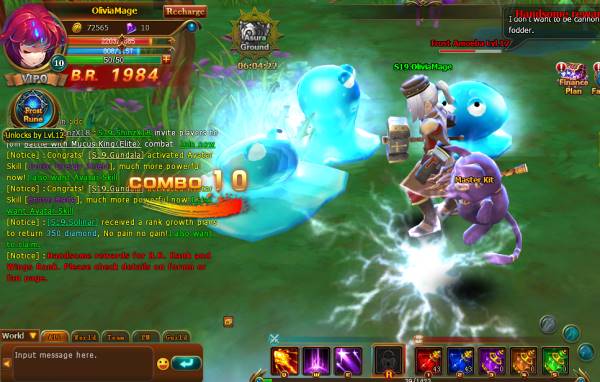 I give you this warning, though: beware, you may experience an overdose of cuteness and adorable animals.

Disclosure: I can never get enough of cute animals. Sorry, that is just the way I am. I love those cute cats, pink dinosaurs, bright yellow pet birds, and so forth. 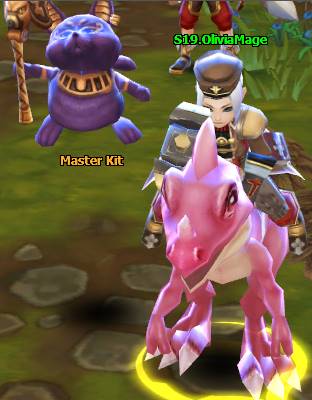 On the left side is a screenshot of my character S19 (the server number) OliviaMage (my character name) mounted in a pink dinosaur, her pet cat beside her.

The cat is a super adorable Egyptian cat that also fights by my character’s side.

I was actually thrilled when I got this pet for free. In other MMORPGs the starter pet they give you is very plain and sometimes sucky. This one was quite has some flashy and effective fighting skills. He can levitate and even has a cool Egyptian scepter accessory that I think looks awesome.

I was also able to acquire two mounts for free. One is a big yellow bird (not pictured) and the one in the picture is a pink dinosaur. Again, an excellent design and it was free so I was pleased.

As I continued playing, I finished quests and explored dungeons, always on auto. However, after some time I noticed that you can turn off the auto and play on manual. That is a very good thing!

On manual fighting mode the combat is very easy. My mage character uses elemental magic attacks such as firebolt and blizzard. To fight the mobs or bosses I just click on my skill bar or press a button my keyboard to activate a skill. The skills animations in this game are large and impossible to miss because they are so flashy.

Combat so far has been pretty easy. I have not died and the enemies are defeated quickly.

One last thing before I conclude this review: a word about the music and sound of CoA. Generally speaking, I tend to mute games. I find most game music to be annoying and repetitive. It was only when I started to write this review (which I was writing while playing) that I realized that, contrary to my normal practice, the sound was on the entire time.

I would say that I was listening but not in a conscious or active way. However, the fact that I kept it on means that the music is pretty good – not annoying at all. It was nice, I liked it.

Pros: There are three classes available which is good enough fro a browser game. The 3D graphics are excellent and the game is fast-paced. It has dancing in it.

Cons: The game is far too easy for people who enjoy a challenge.

Clash of Avatars is a cute, fun game for casual players. The auto-path and auto-combat features make it clear that the game is meant to be a relaxing experience. Those who are looking for a challenging game should look elsewhere.

Thank you for reading this review. If you have any feedback, please leave a comment below.