Crush Online is a game in which you – the player – find yourself in the midst of a great war within the land known only as Gaia. It is a PVP-focused MMO game that has MOBA-style combat. It is free to play. 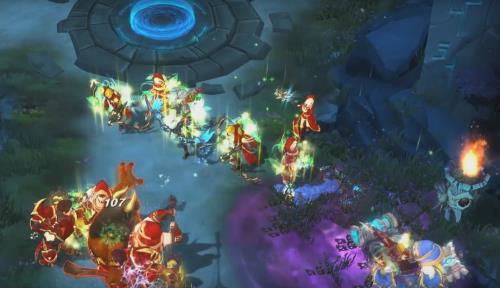 The graphics of this game are of a fairly simple nature, but at the very least create a “clean” appearance, with not much visual glitches to be found. Though this makes one wonder why it appears to run so slowly in some aspects, given that there isn’t anything visually to imply a need for high processing power. The music is equally simple, but enjoyable – so long as you don’t mind the same tune set on repeat for a few hours. Personally, I did not mind too much – music is something which is pretty easy to tune out while playing a game like this.

I was disappointed to find that despite there being a fair (not much, but more than one can come to expect in the realm of MMORPGs) amount of customization in regards to the character’s appearance – specifically, the ability to change their face, hair, and outfit colors to more than just one or two choices apiece – there is little to be done beyond that. This will be addressed more below.

Players start the game by deciding on which nation of Gaia they wish to fight for: Arslan (those who have been attempting to conquer Gaia for centuries, evidently without much luck), Erion (those who were once known as the strongest, and wish to regain that glory), or Armia (a leading nation that has absolutely no intentions of giving up their status). Whichever nation you choose, it does not seem to matter – you will end up in the same starting point of the game regardless.

Players have the option of three, gender-restricted classes: Saint (the only female class, and evidently a mash-up of duelist rogues with mages), Punisher (the typical long-range and assassin rogue of the group), or Guardian (the heavy-handed warrior). Each class comes with two “basic” armors to choose from, and three outfits you can preview and potentially unlock/buy (I am honestly not sure which – it was not stated) later in the game. The characters themselves give off a distinctly young vibe, making the fact that the female character has a somewhat revealing top vaguely creepy, to be perfectly honest. They have no voice to speak of – not even a grunt or similar noise of effort for battle.

The non-playable characters of the game have unfortunately been reduced to little more than quest givers, though their avatars which appear during conversation (fully designed images meant to entice players, and with far more detail than one could ever hope for the player characters themselves) do provide some visual enjoyment. There is no voice work to be done here either, sadly. 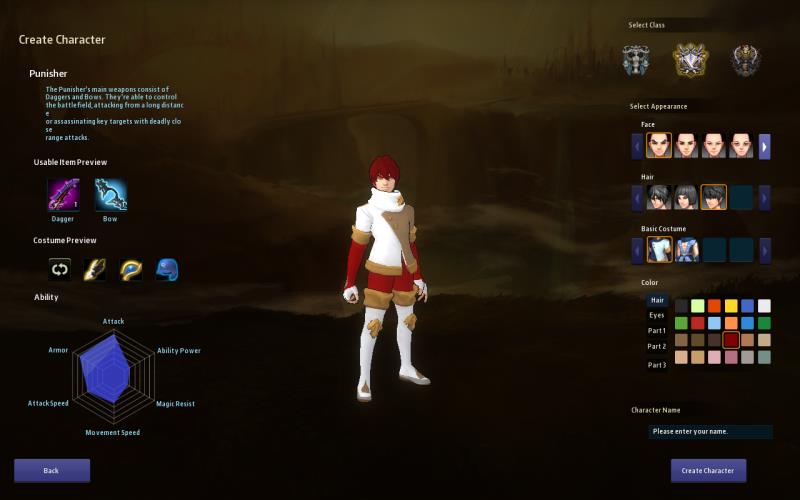 The most important aspect of any MMORPG, and the one that seemed to receive at least moderate attention within the game, at the very least. There are several ways for players to interact with one another within the world of Crush Online. One such way is, of course, the open chatroom for which players can communicate within. There are also dozens of achievements to attempt to obtain, and such status could be used for bragging rights in the same way that most console gamers use their own – depending on if you’re into that sort of thing.

Players can also compare their ranking to other players at any point in the game, or even challenge them to a fight within the Battle Arena. Though considering the found reports of bugs and glitches within said Arena, I would recommend exercising caution.

How would one describe the general gameplay of Crush Online in a single word? Dull.

Crush Online’s interactive text when it comes to dealing with NPCs is painfully slow – you’ll be waiting ten seconds for six words to form. Thinking that this may be related to graphics causing too much lag (despite the game running at a normal speed), I tried to lower them – and the game promptly crashed. Evidently, you can’t touch them without this happening. 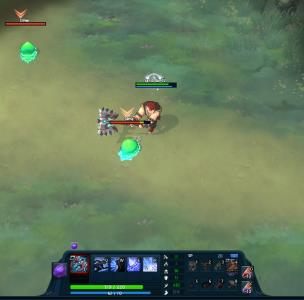 Battle is fairly automatic, as player characters will immediately begin attacking if within range of an enemy, regardless of what menus you may have open. There is also the issue of health/mana regeneration – there is none. Further research has revealed that this will be the case for many levels, until certain high-leveled equipment is gained. This means wasting in-game money on dozens of potions just to survive.

The layout for characters and their skills is very plain, and feels as if not much was put into it beyond naming exactly what the skills and stats your character has are called. Even the equipment slots within the inventory seem as if they were just added last minute, without much care for design in mind.

The game makes use of a right click for everything, which is odd, to say the least. Attacks and abilities are linked to the “QWER” buttons. The only thing I particularly liked about the controls was that the speed wasn’t too slow (except for recharging – that was ridiculous), and players can click the map to set their potential path, minimizing some of the constant clicking needed.

There are very few things I can honestly say that I liked about playing Crush Online. One advantage is that it is a free game, so if you feel like trying it out for yourself, you do not waste any money if you find yourself not enjoying it.

The community for Crush Online is fairly small, in retrospect, but at least seems to carry the air of enjoyable people to be around. Players have been reported as helping rather than hindering each other, which can be something potential gamers may look for while searching for something to play.

While it’s not the worst game I’ve ever played, it’s certainly not the best.

Thank you for reading this review. Looking for more games? Here’s a list of the most popular massively multiplayer online roleplaying games (MMORPGs) of 2017.

We would like to know what you think of Crush Online and this review. Do you play this game? Do you like it? Please leave a comment below if you have any feedback.