When DC Universe Online was first released, many people were very excited for what was to come, but now that it has been released on PS4, is it even better? I decided to test for myself. I have gone ahead and split this review in different subsection. If you have been playing on PC or PS3, launching it is pretty easy. Just log into your account and go. 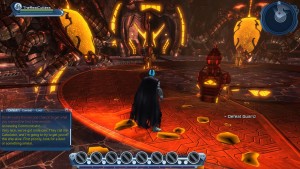 The first thing you see when you launch the game on PS4 is the opening scene. Now I have played many MMOs and games akin to that, and all seem to have decent opening scenes, but never once did the opening scene send chills down my spine. This one is the exception, The opening scene is absolutely amazing. It does an excellent job of explaining what happened and clearly expresses the storyline. No spoilers here though! Go watch it for yourself.

The graphics are lightyears better that what the PS3 version had to offer. Honestly, there should not even be a comparison. They are more realistic and more fake at the same time! But that is a good thing! Since it is a MMORPG, we cannot expect something very realistic, since most are fantasy or supernatural based. DC Universe does an amazing job at portraying exactly what they want us to see. Although I do wish they would add more details to the streets and the cars as soon as you spawn. 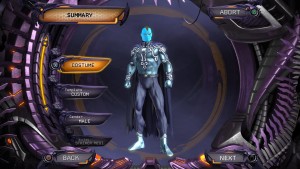 After you get past the scene, you reach the part where you can create your player. I was actually impressed by how many things you can customize about your player. You can customize everything from personality to skin. You can even be a reptile if your heart desires. This really adds another layer of uniqueness to the game. One downside is that for some features, you need to buy a membership. But hey, the game itself is free, so i guess it makes up for it.

Now moving on from that, you get to another short animation. This animation is just as good as the first one. This one is in a sense a second part of the first one. When you create your player, you get to choose a villain or hero to be your mentor. This second scene will explain more about them and what they did. Watching these short films give you a basic knowledge of what is going on.

After that, you come to a tutorial. The tutorial is really a part that I like about this game. The tutorial is actually disguised as a “mission”. You are trying to escape the ship. This tutorial does not cram information down your throat all at once, it slowly lets you get the hang of it while still having fun. Many games these days lack that. 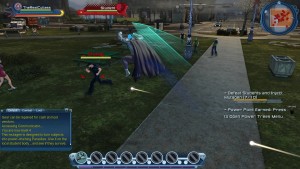 The combat of this game is one area where this game excels. The combat is real time strategy. There is no turn based combat. You just walk up to enemies and start attacking and they can fight back. As for character, you can basically create your own person. You choose your mentor to, well, mentor you and give you missions. There are also “Agents” around the town that you can speak to and get missions from.

The game allows you to buy power and skills upgrades. The “purchasables” are a very nice feature. Although the menu where to go to buy them, is not so great. You press the “Options” button to open up the menu. One thing I did not like about the menu was its complexity. Sure, you will get used to it eventually, but for new players, it might be enough to make them give up. The UI is very complex and took me about 10 minutes to figure out where to go. Once you get the hang of using it though, it becomes relatively easy to mess around with.

Then you are released into the world. At first, you will teleport to the nightclub. These nightclubs are your safehouses. There are then various quests that you must do inside the club before the send you on your first real quest. Then, you will be released out into the world. The map on the top right of your screen will show you where to go. It took me a minute to figure out that the yellow arrow I was told to follow is on the edges of the mini map. On the bottom right of your screen, the game will tell you what you need to do next. In case it does not, you can press the “Options” button and go to your journal to see what you have to do. The first few missions are self explanatory.

I think that the developers want new players to want to play, so they make everything relatively easy to use. (Except their ui, that is) I found this feature extremely helpful because I get confused easily. Later in the game, you also get to purchase and customize your own lair. You can attack other people’s lair and defend you own.

The game is overall a really well-made game. DC Universe online is most likely the best Superhero MMO out there right now. There are not many games that I play and enjoy as much as I did this game. I will definitely be playing this game often, and since it is a free download, there is no reason why you should not give it a try. Overall Rating: 8/10

« A Tale in the Desert Review
Wildstar Free to Play Review »