League of Angels II is a fantasy style MMORPG in which you, the player, take on the role of a Hero, brought in to fight alongside Angels (also Heroes) in their quest to retrieve three lost “Relics of the Angels.” These relics that grant the holder immense power and have fallen into the hands of the evil Plague Queen, leader of the cruel Orcs. It is up to you and the Angels to defeat the enemies, retrieve the artifacts, and restore peace to the world of Angels. 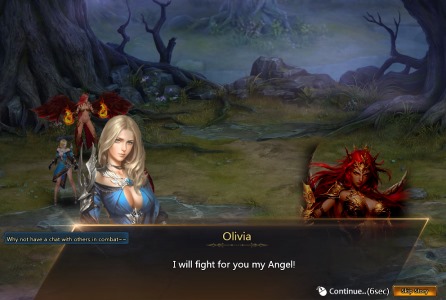 League of Angels II makes use of high definition, three dimensional graphics which tend to lie on the edge of the line between those found in games like Skyrim and those found in games like “Bully”. This is not to say they are poor in style – in fact, for an MMORPG that has just been released, they are quite good. The music is light and airy, befitting the fantastical setting of the game appropriately, and changing with each type of scene, from general travel to battle.

As stated before, the player takes control of a character known only as a “Hero”. This character can be male or female, as chosen from the beginning of the game, and although there is no option to alter the character in any way beyond their name (apparently with the bonus of not having to worry about names already being chosen), the character designs fit fully to the “eye candy” aspect that seems to follow a majority of the character designs within the game. So long as you do not mind playing an attractive, blonde character, than you are all set to go. 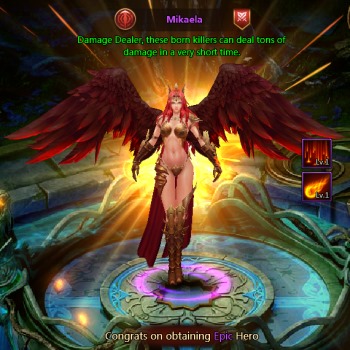 The player character has the ability to summon “Heroes” in the form of Angel companions to fight alongside them in battle. Each summoning costs part of the total mana available for this specific purpose. Due to this set limit, free players can only “summon” two other Heroes at a time, while membership players (also known as those whom have paid for a premium gameplay experience) have the ability to summon three or more at a time. These Heroes are a permanent part of your party until they are dismissed, and although they will not be seen when exploring the general marketplace area, they will automatically be at your side when it comes time for battle.

The dynamic between the characters is fairly interesting, for while you are the one to summon them for aid, specific dialogue (ie: referring to your summoned Angel as “my Angel” and agreeing to serve them) would indicate that they are ones truly in charge. This is made more interesting given the fact that most games have the player character taking the lead, although the game maintains the “player controls every move” aspect found in most MMORPG games.

The non-playable characters of League of Angels II are by no means part of the exception to the “every character is eye candy” rule found within the game. Even the major enemies are not spared this treatment, made to be just as attractive as the Angels and Heroes you the player control within the game. Each one is made to be an individual, with their own stats, voice, personality, and background. There is also a variety of races to be found beyond the playable characters, including genies, fairies, mages, and a dual-winged woman I could only assume was a half-angel, half-demon.

I was pleased to find that the voice acting is very well done for an online game. There is no generic, “one voice for a dozen characters” recordings to be found. For example, the small fairy woman who serves as your tutorial guide has a high, cheerful toned voice one would expect from someone of her character. Meanwhile, one of your Angel companions – a literal fiery woman with an impatient temper to match – has a voice that is both hostile and somewhat gruff, regardless of whom she is speaking to. Each voice perfectly matches the character and their personality. 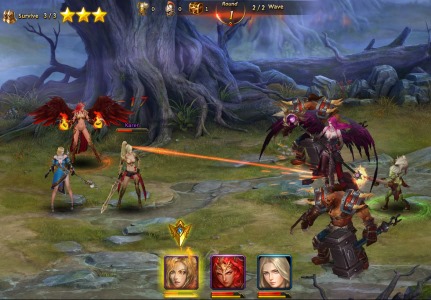 League of Angels II is an entirely mouse controlled game, beyond naming the playable character of course. The game is, for the most part, a strictly fighting game, in which you and your Angel companions team up against the “Orcs”. An ironic name, given that despite the call for “fighting orcs” there does not seem to be any actual creatures of that name. Instead, players will find themselves facing off against wolves, wizards, dragons, goblins, and rival Angels, amongst other creatures.

Battles are (for the most part) strictly fight only – you travel to the fight zone, battle it out in a side scroller style of fighting (if side scrollers were to ever gain three dimensional graphics) and return to the main world. However, they also have the option of being replayed if the player so desires.

While in battle, players can trigger manual or automatic attacking, and even toggle a feature which will speed up the automatic battle (for any players looking to bypass an unnecessary or boring fight). I found this feature particularly useful while going through the tutorial, which was long, and at times felt a bit unnecessary (along with the unfortunate issue of not being able to opt out of it).

Players and their fellow party members level up and become stronger through the use of “Aether Prisms” which allow a character to “Augment.” This process of “Augmenting” appears to have a similar effect to gaining experience points and leveling up, as Aether Prisms are only gained through battling enemies and winning them as loot.

League of Angels II is certainly an interesting game. For one that just recently came out, there is no bugs that I could find, or any glitches which would affect the gameplay. Any avid player of MMORPGs – or any other online game for that matter – can attest to just how rare that is. There does not seem to be much player on player interaction beyond a chat box, but that does not diminish the game. I would recommend this game to anyone looking for an enjoyable afternoon, especially speed players.