Lords Road is a 2.5D browser MMORPG with lots of daily events and quests. The game is a pretty good way to spend the time if you are bored and want to play an MMO. It’s free and there is no download or client install needed.

The name of the game is a bit confusing. I mean, surely it should be “Lord’s Road” with an apostrophe, right? But the official game website just uses “Lords Road” with no apostrophe so that is what I will use for this review. 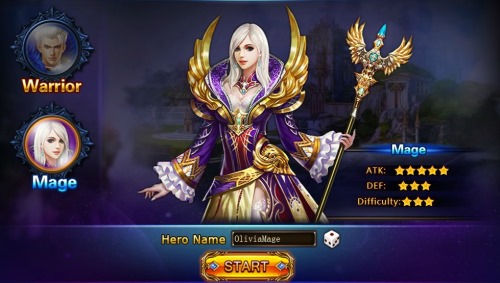 The screenshot above shows the character creation process. As you can see, there are only two choices and, except for the name, there is no way to customize your character. That is a little disappointing. I would have liked more classes. 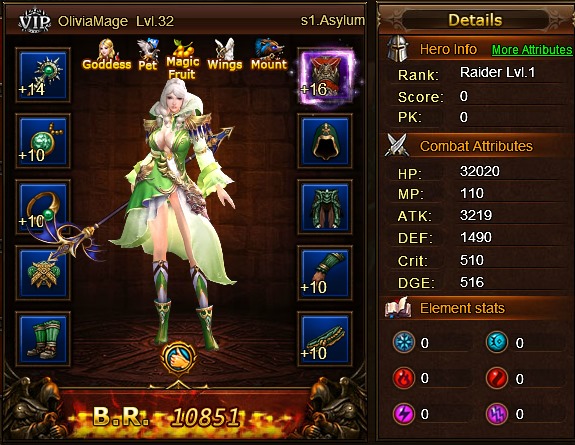 I have played until level 32 on server 1. Character Info:

I did like my character’s design, I think she looks nice in the green outfit. The hair, face, body, etc. are not too detailed but it’s good enough for a browser MMORPG.

Although level 32 sounds like a pretty decent level, the truth is that levels are not that significant in this game. What really matters is your character’s Battle Rating (BR). BR is a measurement of how powerful your character is, so the higher the BR value, the stronger your character is in battle. You can see OliviaMage’s BR on the bottom of the screen, it is currently 10,851.

BR is mostly dependent on your gear and other attributes like: your pet, mount, wings, goddesses, bonuses, etc.

Combat is pretty straightforward. Characters have a number of skills that have different attack values and AOE or solo effects. Battle mainly consists of choosing a target then doing a skill rotation based on available skills and their cooldown timers.

Having said that, battle is pretty insane in Lords Road. When you enter a dungeon there are tons and tons of mobs that you have to kill. The mobs don’t just mill around and wait for you either, they rush at you in groups and try to kill you. If you click on the screenshot above you can see a bigger image where my character is completely surrounded by enemies.

Thankfully, this is not too much of a problem since my mage skills can target all of the enemies in an area. I just have to spam my area skills until they die… 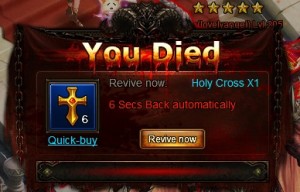 … but sometimes I die first. It can be dangerous in dungeons and events. If you hate dying, this is not the game for you.

There’s also the arena. This is supposedly a Player-vs-Player (PvP) arena but it’s really more of a quasi-PvP thing since what you fight is not a player-controlled character but just an AI. That’s because in the arena are clones or copies of each player with their stats, goddess, equips, skills, etc. but the game AI controls the copy.

You can challenge the player’s copy arena character any time you want to during the day (it’s not a timed event) but you only have a certain number of fights you can do per day. That might sound a bit lame but its a good way to see how other people have made their characters and how your build stacks up to them.

Each character is accompanied by a goddess. The goddesses are unlocked through various means and players get the first one through the main quest line quite early on. Only one goddess at a time can be deployed. 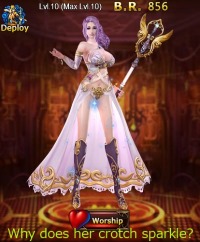 Goddesses have combat skills that can help the players out a lot. They can be leveled up separately from the character. The goddess on the screenshot above (Fortuna), for example, has a BR of 856. Fortuna can cast a spell that deals damage to multiple targets, with a 5-second cooldown.

About the text on the image: the goddesses have an animated sparkle effect and the effect is weirdly strong in that area. Why? Your guess is as good as mine.

Browser MMORPGs are not really known for having great graphics but Lords Road is the exception since it has very decent graphics. Granted, the graphics are just 2.5D, not 3D, so it’s not as good as it could be, but it does still look nice.

It looks like the most effort has been put on making player characters look the best. This is a good idea since most players love to have cool-looking characters. Lords Road delivers by giving characters a great look and awesome animations, with lots of extras like enormous mounts, cute pets, pretty wings, and beautiful equips/weapons.

Lords Road is a good game to play if you want something fun to do since it has a lot of content, including a ton of daily events and quests.

I don’t really like the daily quests. They are pretty tedious because all the the tasks are easy ones that are boring. This includes stuff like collecting rocks or timber although there are some combat tasks (like killing 40 mobs), too. It’s basically just running errands around town. On the plus side, the daily tasks are easy to do so it’s not really much of a bother to complete all of them for some good rewards. 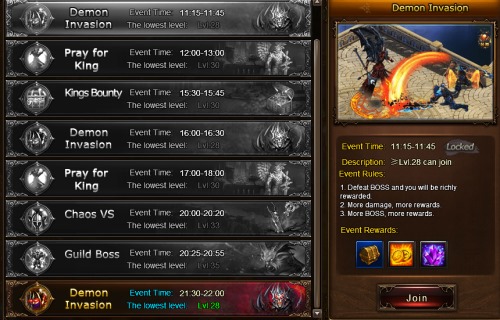 The daily events are much more worth it. There are a lot of events so every time I log in there is something to do. For example, bosses spawn every other hour and they give good drops.

I enjoyed the events that I joined. Above is a screenshot of the Demon Invasion event. In this daily Demon Invasion, a total of ten waves of demons are trying to invade the town and it’s the players’ responsibility to kill them all. I died a lot since there were tons of strong demon bosses but I enjoyed myself. Since I was so low level compared to the bosses, I got a huge attack bonus. It was cool to see my char hitting higher numbers than normal.

The game played pretty smoothly for me. I didn’t even notice any bugs nor did it crash at any time. Unfortunately, I did have a problem with my game randomly disconnecting. I am not sure if this was my fault or the game’s but I suspect it’s their fault since I tend to get disconnected during crucial times, like when an event ends and the the last boss is killed.

All in all, Lords Road is a decent browser MMORPG with good graphics and gameplay. It’s not innovative but if you just want a cool game to play, then I can recommend it to you.