Open up your laptops and start up your computer, gamers – there’s a brand new game in town! 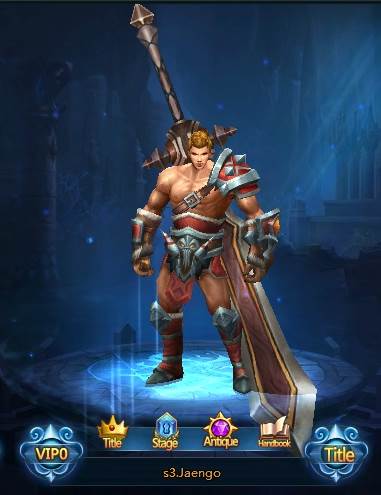 Welcome to the world of Omega Zodiac. After a first play through, this game appears to have accomplished uniquely blending characters Greek mythology with an original fantastical (or shall I say “mythological”) twist. Those familiar with the topic will find familiarity in names and characters with thin massive multiplayer online game, including those such as Hades, Athens, Poseidon, and Athena.

In this game, you are a fearsome warrior summoned to aid in the defense of the goddess Athena herself, as the Sanctuary centered within Athens burns and faces destruction around you. Many NPCs will raise the same rallying call: Protect Athena, and drive out the destructive opponents which now reside within! 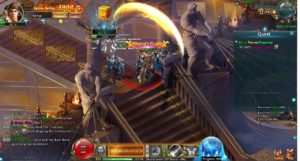 The graphics in this game are just plain wonderful. While the surrounding areas themselves are simple – yet no less aesthetically pleasing nor of pointedly lesser quality – the designs of Grecian temple pillars and architecture (as well as the range of purple, blue, and white hues found in the surrounding background air) are beautiful. Characters get the majority in the graphics department, gaining more delight in the muscular curves, and varying nooks and crannies one would expect to find on the human form. That’s right, there’s solely human characters to be found in this particular game, and attractive ones at that!

I enjoyed the music selection found in this game, because for once, it did not sound like something ripped off a music site somewhere and passed around to a dozen or so other MMORPGs. A lovely orchestrated piece that I would not mind indulging in repeatedly whilst playing the game, rather than suffering continuously with the thought of “If that song plays one more time I swear …” 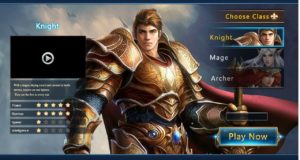 Players have the option of choosing from three different classes for their character: Knight, Mage, and Archer. Anyone who has ever played any form of adventuring and/or roleplaying game will recognize these as the three basic classes. Each class consists of four different skills (Power, Stamina, Speed, and Intelligence) which are rated on a scale of one to five starts, and will influence their starting battle statistics within the game. Each character also has the option of a preview video which will allow players to look into their specific fighting style, making it easier to choose one which fits to their particular style of play.

Character customization is unfortunately next to none, with the choices limited to the human pre-sets divided only by class, but the characters are interesting enough that this is not a huge loss. Surprisingly, there is a larger amount of female characters than male (an uncommon sight when it comes to general gaming) in that only the Knight class provides a male character. Classes are gender-locked, and cannot be changed by the player. Players can, however, provide a name for the character of their choosing, up to six letters. There does not appear to be any further limit to character naming, so have fun with that feature!

As stated earlier before, anyone who has ever shown an interest in Greek mythology will find themselves quickly recognizing the names taken on by many of the non-playable characters in this game. These characters serve primarily as quest transference points – that is, they are only truly necessary to talk to as a means of continuing your current quest, and gathering more information about it. Some also serve as notable figures within the game, such as the goddess Athena, whom you are summoned to protect after she has fallen in battle. Beyond that, however, they do not serve much purpose. 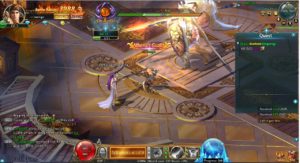 Like most MMO role playing games, Omega Zodiac makes use of a global chatroom so as to allow players to communicate among one another. Along with this, players can also team up with other players to form guilds, and compete to increase their ranking in terms of strength (combat level) and position in the game. However, there is one unique feature to this game that I was particularly pleased to find out about: PK (player killing) zones.

Omega Zodiac has player killing worked down to a basic system which makes use of colorful notifications beside the character image. There are five sectors which determine PK capability within the game: Peace (no attacking other players), Guild (only attack players who are not in your guild), Team (attack all players except teammates), Red Name (only able to attack players with red names), and All (obviously, you can attack all players).

Killing players without red names on the main map will result in Guilt points which will negatively affect your character. These Guilt points can be reduced through purchasing Redemption Cards or simply waiting for it to lower itself as you continuously play the game.

Omega Zodiac is a game completely played by the mouse, though there is the option of triggering attacks via keyboard controls. Players will find themselves faced with various opponents – including evil warriors, followers of the opposing gods, and the gods themselves – which they are able to fight solo or with other players.

Leveling up in the world of Omega Zodiac is fairly easy, as is battle itself. Facing a level forty opponent when you yourself are only level eight in most games would result in a thorough beating on your part, but in this game, you are the ultimate fighter, and will easily plow through swarms of enemies. This is made even easier by the fact that enemies will not engage you first – you can literally stand among a group of them and be in absolutely no danger, until you take the first swing. Attacks have their own short animations, including one for a Sacred Set of weapons and armor, of which I have to say is utterly badass to witness.

All in all, Omega Zodiac is a pretty great game. It breaks away from the cookie cutter style of most MMORPGs these days, and instead provides an interesting and enjoyable experience. Considering the easy gameplay, I would recommend newer gamers to check out this game. 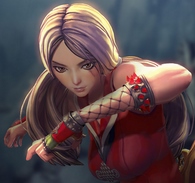 Best MMORPG 2017 Games List – click on the link to go to the home page of this website. It features a list of the top new and upcoming massively multiplayer online games of the year, updated every month.

It’s not just about the most popular mainstream titles; a lot of innovative and ambitious niche games are also included.

Got feedback? Leave a comment on the main page or here.