Salem is a delightful little game for Java users everywhere. Crafting is the name of the game here, as it is at the center of doing anything, and everything. Take on the role of a Pilgrim brought to a new world, and earn your place – as well as learn to survive – as you start from the same spot every once else did in history: straight from scratch, with nothing but what you can find yourself or earn from others.

In short, it’s an open world sandbox crafting MMORPG. Be warned: there is permadeath. 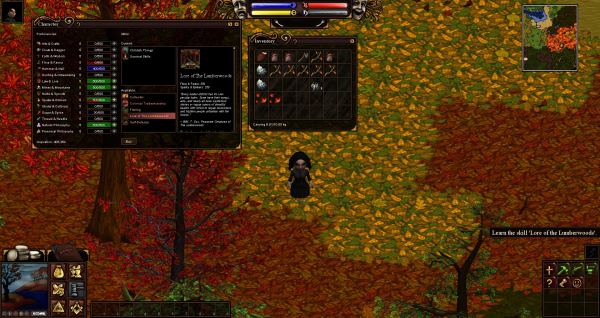 The game can be found at http://www.salemthegame.com/.

Salem and I have a love-hate relationship when it comes to its soundtrack. In some cases, the music is absolutely lovely: a playful, spooky tune that is reminiscent of old Halloween cartoons and fantasy games. Or a cheerful song with which to tap your foot along with as you play. Other times, the music consists of two to four notes set on repeat, for several minutes, until your nerves grate so thing that you would swear murder should be allowed straight off.

The graphics in Salem are incredibly simple, and as such, have some fairly ridiculous imagery to behold. My own female character looked more reminiscent of a witch than a pilgrim with the pre-set face provided, and the movements when it comes to building objects or starting fires is hilarious to behold. 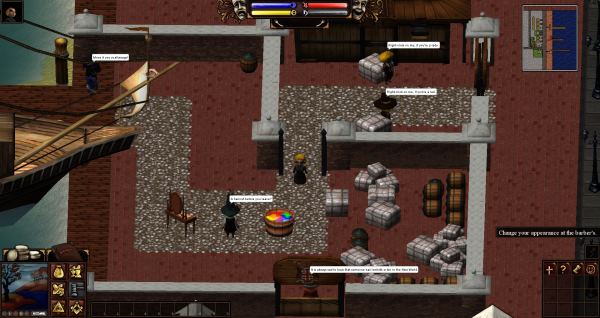 Players have a little customization to be found in this game, with each option accessed by talking to a number of NPCs at the start. From choosing your gender, to your hair style, and even its color, everything is done from consistent interaction. Well, beyond the color – that involves interacting with the barber’s colorful vat, certainly providing an amusing mental image as to just how your character changed the shade of their locks so quickly. Names are chosen as soon as players access the boat to the “new world” they are attempting to enter (Britain, I believe), in the fashion of a ship’s captain checking off passengers on a manifesto. Names are entirely up to the player – there does not seem to be any major restriction.

Unlike many MMO games I have played in the past, other players serve a far more villainous role in the game of Salem than most others. While it is true that some players may choose to join you as a buddy or even leave property for your new character to inherit at the beginning of the game, the narrators and help guides warn newbies from the start: other players are one of the greatest dangers you can face in this game. After all, not only can other players decide it might be fun to attack you in a duel, they can also utterly destroy anything you have invested your hard work into building, and steal your supplies for their own. It is a cutthroat world in Salem, indeed!

As stated earlier in this review, crafting is the name of the game when it comes to Salem. If you wish to do just about anything, guaranteed some degree or crafting or supply gathering will be involved. Quite a bit is involved in this game: nothing is made very easy, providing a nice level of challenge for each player, though you may find yourself fumbling through as you attempt to understand just how you are supposed to do anything, as I had. The in-game guide provided was unfortunately unhelpful in this endeavor. 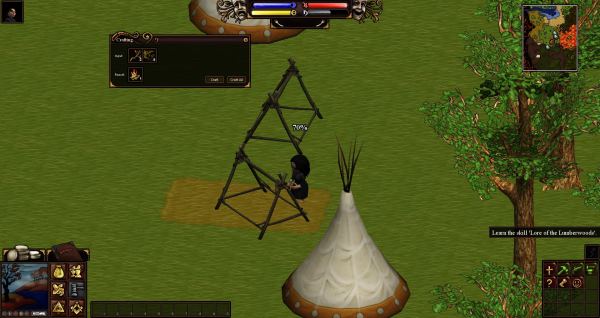 Skills are an absolutely vital aspect in this game. Unlike most roleplaying games, which use skills as fun extra abilities or advantages, these skills are required to unlock crafting recipes – the very things you’ll need to start building your civilization. The more you have, the more variety to your crafting… but not without a cost.

Players are restricted by four types of “humours.” Those familiar with medieval medicine and its beliefs, will probably recognize this term. Those that are not, well… just think of them like health and stamina bars. Crafting items or studying takes away from these bars, and eating restores them. So in this game, treat your humours the way you are expected to treat college life: study for a while, eat something to replenish energy, and repeat.

Studying is also essential in this game, as it unlocks the skills needed for crafting recipes. Points are built in different subjects to unlock skills, with some requiring points from multiple subjects. How do you get these points? Start foraging everywhere, and hope that you find something that has the option to study it.

Nothing comes for free in this game. Want a decent meal? Craft a pile of wood (yes, you seriously need to do that), a flint fire starter, and make sure you have the skill to craft food recipes. All of these different things require items which can be foraged, either by hand or by using tools on things such as trees or bushes. How do you get these tools? You guessed it: crafting! Not to mention that each item and action is crafted at a different pace – some things will be made more quickly than others, like a fire pit compared to a whole tent.

Having a stockpile of supplies is a useful thing when it comes to a game so heavily reliant on making your own tools and goods. But be warned: your player has a 10 kilogram limit, and each object adds to that weight. As you go over it, your character’s movements will get slower and slower, until they seem to hardly move at all. Make some storage containers, and be prepared – enemies and rogue players can be found around every corner, waiting to tear down the shelter and drying rack you just spent twenty minutes putting together.

The controls are a tad wonky, and your character needs serious help when it comes to navigating around anything – be it person or object – but this is most definitely a fun game. Anyone looking for something new to pass the time – or even better, a fan of crafting and civilization games such as these – should definitely check it out! 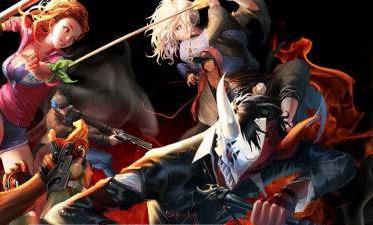 Looking for some great MMORPGs to play? Check out the Best MMORPG 2017 Games List (most current version).

It contains a list of the top new and upcoming massively multiplayer online roleplaying games. Over a dozen titles are featured and they all offer something different.