Shot Online is a unique MMO game, in that it is – of all things – a golf MMORPG. In it, players join the large community of golfers found within the world of Shot Online, and take part in challenges, quests, and general fun with other players. 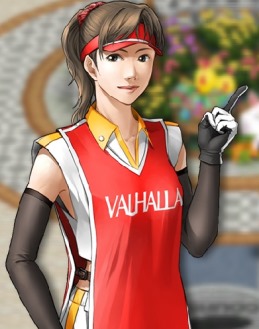 The graphics in Shot Online are fairly simple, but no less aesthetically pleasing to look at. There are no glitches, stuttering views, or struggles in basic animation. Despite its lower than HD quality, everything is played through quite smoothly. The music in Shot Online is upbeat and lively, but very quiet in comparison to the rest of the game sounds. However, considering this is a gold game – a sport known for its need for quiet – this can be easily dismissed as “not a problem”.

The player character is chosen from a selection of five pre-set characters (seven if you are a premium player), each with their own name, set of skills, and background. The name of the character can be changed to anything you like, so long as it is not already taken by another player. If it has, however, adding a few numbers seems to be the simplest fix.

Characters come with a basic set of clothes which the player can change the top and bottom colors of (choosing from a set of three colors – blue, pink, or brown – for a total of nine combinations), or select one of three unique outfits, whose colors cannot be altered. The character can also choose one of three poses for their character following a successful match (such as waving, or cheering), and their style of swing (from a driver, iron, or putter). 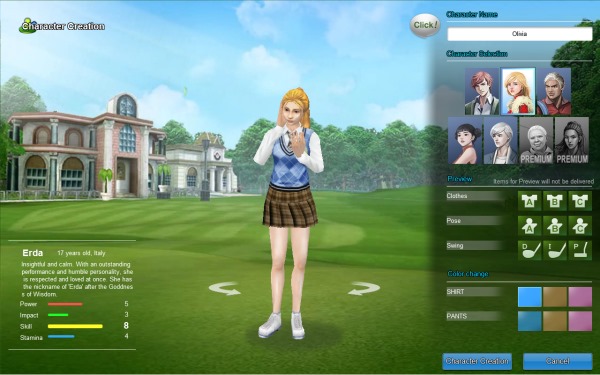 Outfits and equipment which are unlocked or bought with in-game currency can be equipped to your character later on. Surprisingly, these do not have as much of an effect on a player’s overall skill as one would expect. Instead, this focus is placed on the earning of XP through completing courses, quests, and challenges. When a player levels up, they are given two “skill points” which can be used in four unique categories in regards to their golf playing: Power (which affects driving distance), Impact (which increases shot accuracy), Stamina (which decreases the penalties of fatigue or landscape obstacles), or Skill (which unlocks “skill shots” available for a player to attempt with specific aiming and power).

Non-playable characters (or NPCs as we know them) play a significantly smaller role in Shot Online in comparison to most other MMORPGs. The few NPCs to be found are little more than tutorial guides, challenging rivals, or quest givers, with little to say or comment on outside of those roles. All in all, they are fairly unimportant once you have gotten the basics down, beyond serving as messengers. 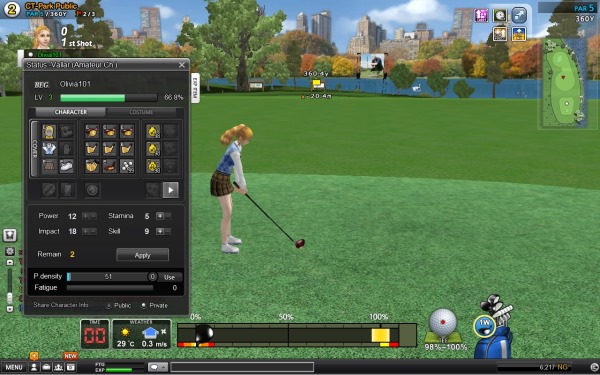 Players have the opportunity to take part in a number of group related activities within Shot Online. Large groups of players can team up to form “Guilds” under a single leader, and “scout out” new players to join them. Rather than requiring tracking down said player at a good time and talking to them, Guild leaders can send out a “scout request” to potential members, asking them if they would like to join their Guild (of a name which they choose themselves), and providing the leader’s name. Players can, of course, accept or refuse this proposal, but will find themselves stuck until they do so, as nothing else in the game can be interacted with until an answer is provided.

Players also have the option of not only interacting with other players through chat boxes, but challenging them to courses as well. They have the opportunity to compete against friends, rivals, and absolute strangers to prove just who is the best golfer around.

Shot Online is a game in which – obviously – a player golfs, using keyboard controls for a majority of the play. With dozens of courses at their disposal (which are also customizable in that the amount of holes and such can be changed to the player’s preference), players have quite a bit to enjoy in this game. Every shot made will be judged by the game based on distance and power, so players can enjoy their screen lighting up with calls of “Birdie”, “Par”, “Par Par”, “Green”, and “Rough”, amongst others. 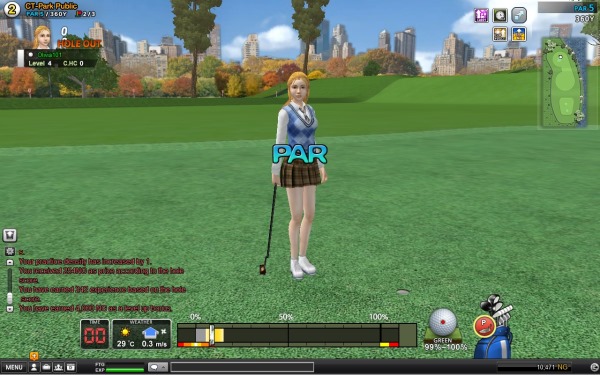 Quests usually involve completing specific courses with the reward of experience points and in-game money. Players also have the opportunity to take on challenges for reward, typically involving making specific shots or ending a course with a certain amount of points. At the end of each course, players can enjoy reviewing their scorecard, which adds to the feel of realism found within the game.

Overall, I would say that Shot Online surprised me as an MMORPG. I had never played a sport game in this fashion before, and had not expected too much of it – more so because I am very unfamiliar with most golf terms, and as such, they tended to go right over my head while playing.

However, Shot Online has proven its worth as an excellent game. It is easy to play, enjoyable, and surprisingly relaxing to play – likely more so than your average game of golf under the sun.

My only complaint about this game would be its tutorial: while helpful to new players, it is extensively long, and can quickly grow tedious in both its length, and its demanding aspects of following it “exactly” without fail. There is no option to turn it off, or to quit early – the only way to get through it, is to complete the tutorial itself, a feat which will likely take most players about ten or fifteen minutes minimum (unless you speedily click and smash your keyboard all the way through).

Regardless of its unfortunate tutorial, Shot Online is definitely a good game. It is easy to play, and I believe that even players who are not fans of sports games, or who have very little experience in regards to the game of golf itself (like myself), will find an enjoyable and relaxing time playing this game. In short: ten out of ten, would recommend and play again.