Spirit Guardian is a fantasy-based, free to play game for both the Android and the IOS. I personally took part in the Android version. In this game, you take the part of a “Dreamer” (also referred to as “Master” by characters who interact with you within the game) and guide your characters through various battles as they traverse the world, seeking to defeat a dark creature known only as “The Nightmare.”

Spirit Guardian has fairly high quality graphics for a mere phone game, something which surprised me when I initially began playing. All of the colors – even the darker shades – are fairly bright, but this can easily be remedied by adjusting your phone settings if this is considered a problem. The music is upbeat and enjoyable to listen to, rather than a constant, short loop as one would expect.

The game makes itself unique in that an account with the game’s company – GTA Arcade – is not required to play. Rather, players can sign in as guests, with GTA accounts, or through social media accounts like Google, Twitter, or Facebook. Your information is accessed, but not shared in the game, so it is relatively safe. 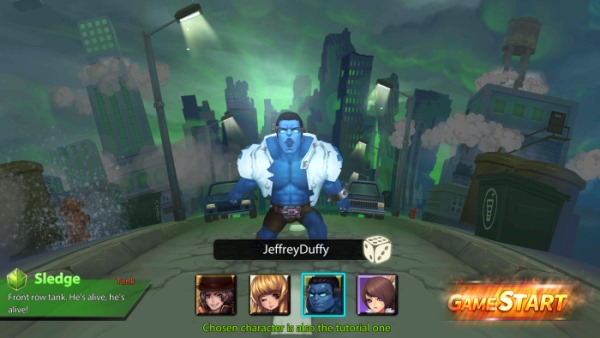 Players get a choice from characters who fit within a set of three classes: Support, Tank, and Vanguard. In laymen’s terms, these are Healer/Archer, Warrior, and Rogue/Soldier.

Players get to choose from one of four characters, setting their nickname (which will be how you are referred to in terms of text boxes) in the same page. First off we have Ash – a muscular, male pirate Vanguard with a fire strike ability. Then there is Cupid, a sweetheart girl who serves as Support in the form of a flying ranger. Next we have Sledge – best described as a “blue Hulk” – who is the team Tank. Finally, there is Virtue – an Asian, kimono-clad bard with a lovely voice, also serving as Support.

Each character has their own unique introduction phrase, ranging from cute/cool to funny, and has the added bonus of being a recorded statement, rather than just a line of text. They will remain as your controlled character throughout the game, as well as your “guide” to the world and the events going on within it as you make your way through the story. 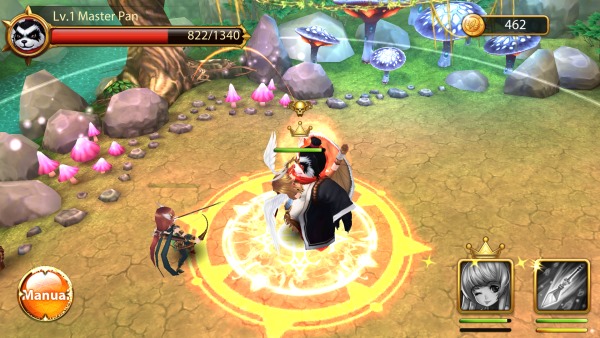 Spirit Guardian gives a strong feel of the old “Super Mario Brothers” game for the Nintendo DS in its world design – thankfully not for the background styles themselves (as the game world is three dimensional, rather than a side-scroller). Rather, the “chapters” of the game have several levels, marked by glowing circles, which make up a path from the beginning of the chapter to the end, and at times have multiple pathways, much like the “Worlds” found within Super Mario Brothers.

The game has the option of either auto combat, or manual style combat, depending on the player’s preference, and can be easily switched with the tap on the screen. As you travel, various enemies appear in the forms of slimes, goblins, human foes, and animal characters much like that of the children’s cartoons and movies of today.

What makes this game unique is that when certain strong enemies (that is, they are the only ones to be found on that level that do not appear in groups or swarms of their kind) are defeated, there is a chance that they have the potential of being summoned by the player as party members for later in the game. However, you cannot control these party members, merely access their special skills when prompted. Movement is restricted purely to whichever of the four characters you chose, as mentioned earlier in this review.

Enemies drop orbs which represent “Health” and “Rage”. Yet another unique aspect of the game, Rage is “special skills” in the game as “mana” is to “magic” in most other fantasy games. A bonus aspect to the game is that regardless of who collects the orbs – be it Health or Rage – the effect is placed for all members of the party, so everyone is benefited. This comes in handy during particularly difficult fights when your companion characters are defeated mid-battle, or when you are looking to link up several “special skill attacks” at once, rather than simply reusing one character’s abilities over and over again. 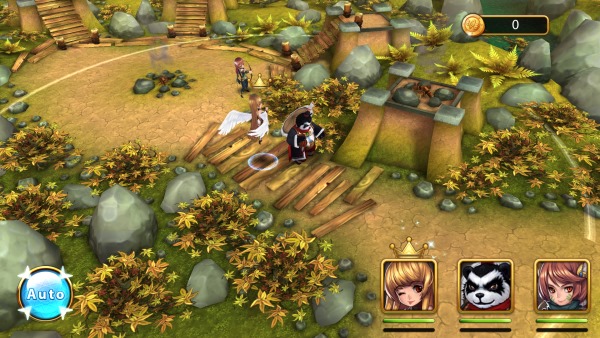 The game makes use of both the different styles of attacks in the game and an elemental match up to enhance combat within the game. The four elements of Water, Earth, Wind, and Fire apply, with Wind subduing Earth, Water subduing Fire, Earth subduing Water, and Fire subduing Wind. It is uncertain what effect these elements would have on those which they do not subdue – if any at all – and whether these elements are strictly only affected by those which subdue them, or are merely face a greater advantage when matched up in this fashion.

Spirit Guardian is actually fairly enjoyable for a mere phone game. While some of the general story remains unanswered for a while – such as why you are called a Dreamer – there is some entertainment to be found in having characters interact with you, rather than just remaining a player looking in on the game. My only real complaints about the game would be the fact that the tutorial is forcibly played when a new character is made – with no visible way of skipping it – and that partway through the beginning game, I was forced to wait and download more content before I could continue playing. At the very least, the content was free, and did not take more than a few minutes to go through, although being interrupted was irritating.

Anyone who is looking for a fun, free action game to pass the time with on their phone should check out “Spirit Guardian.” It is a bit fast paced, but any fans of old school games like Mario will likely find a sense of familiarity at the overall speed of the game.