Swords of Divinity is a new browser MMORPG by R2Games that has tons of daily events and minigames.

Hiya guys, it’s Olivia here again with a review of a new browser MMORPG – Swords of Divinity. It’s pretty good. Before I start the review, here’s a tip: the best way to play is to go to https://www.r2games.com/ and create an account. Playing the Facebook game is fine but playing through the publisher website is better since you can protect your account with a password and recovery options. It also allows access to the forums and customer support.

Now on to the review…

The game gave me a good first impression since it loads quickly on a browser. R2Games does offer a dedicated client. However, I have never used the client because I prefer to play on my browser (Chrome). 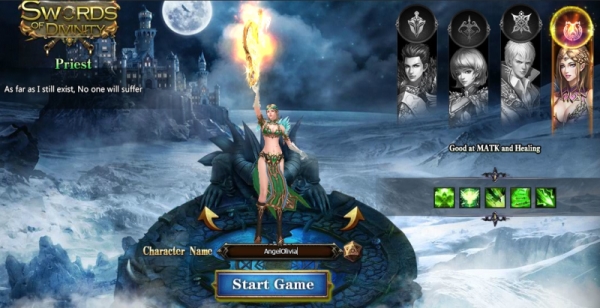 There are only four character classes available and they are gender-locked. I chose the Priest (healer type) which is female but players can also pick from the three other classes – archer (female), melee (male), and magician (male). My favorite class is healer so this was okay for me though I would have liked a female sorceress, too.

I’m a bit hazy on my role as a character. Apparently, my character is some sort of hero and her teacher is the archangel Michael. There are some elven monarchs involved but, to be honest, I wasn’t really paying that much attention to the quest text.

Basically, my character is there to kill monsters and chew bubblegum – and she’s all out of bubblegum! The story is pretty no-nonsense. Just go and kill the enemies, that’s about it. 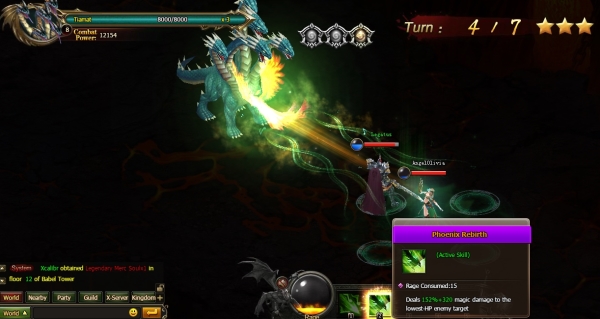 I like the combat but it’s really rather simple, as expected from a browser-based MMORPG. Just pick a skill from the action bar and that’s it. The skill rotation involves a small amount of thinking/strategy but it’s all quite easy. 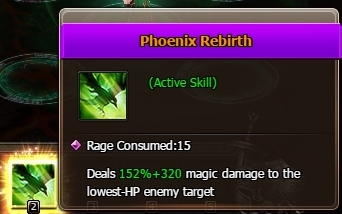 As a healer character I have a few good skills – a basic magic attack, a stronger skill that is useful since it targets the enemy with the lowest HP, an “ultimate” skill that is very powerful, and a party heal. Alas, there is no AoE attack, oh dear!

Of course, the healing is useful when fighting a boss but the lack of AoE means slower progression in the game since most of the mob encounters are at least 3 mobs, sometimes more. Attacking them one by one is slower than AoE’ing.

The main character does not fight alone. By going to the tavern and using alcohol (beer, wine, gin, etc.) to recruit more party members, the player can add some very useful heroes to his or her team.

So far it sounds quite standard, right? Well, 50% of Sword of Divinity is rather routine as far as browser MMO games go but the other 50% is hilarious and fun! I’m talking about the various daily events and minigames. They are super cool and unique.

For example, going to the dungeons costs stamina. Players can get back some of the stamina they lost via this extremely amusing minigame – the banquet. In this minigame, your character will have to stuff his/her face as much as possible within 30 seconds. I laughed. See the screenshot below:

There’s also an escort quest which requires the player to (obviously) escort an NPC. Such quests are notorious for the NPCs that lack common sense and head into danger, only to get themselves one-shot killed before the player character can save them. In Sword of Divinity, the NPC you have to escort is even more useless than that. Check out the image below:

Yes, the NPC is totally useless, even her legs don’t work so the player has to carry her. I thought it was funny. 🙂 I mean, at least this way the NPC won’t be running here and there to get killed.

Another very interesting minigame is the treasure puzzle (image below). 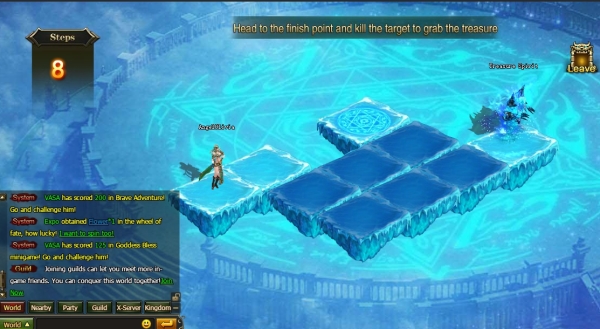 In this puzzle minigame the player is given a set number of moves to reach the treasure. Each step has a chance of spawning an obstacle, bonus, or treasure chest. There are a number of different puzzles and they are very challenging.

Sword of Divinity actually has a large number of minigames. I have only reviewed two of my favorite ones here.

In addition, there are a number of events that the player can join.

I was playing at server 12 and joined the guild “Seven Seas.” Guilds are essential to playing Swords of Divinity since joining one allows the player to get guild skills and attend guild events. It’s also nice to have people to chat with while playing the game.

Speaking of people to chat with, I also got married in the game. Weddings are an actual in-game event, as you can see from the picture below:

Last, but not least, there are a number of exciting PvP events that I joined 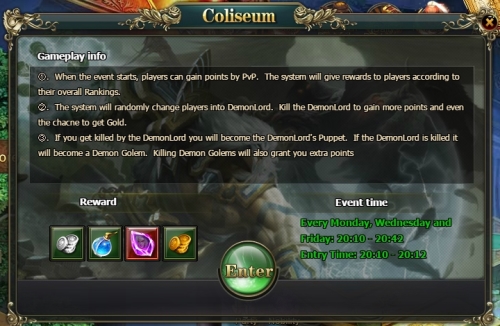 Coliseum is a PvP event. Players simply fight each other non-stop. They are ranked according to their wins/losses and get rewards based on their ranking. It wasn’t really that fun for me since I am a newb therefore I lost all of my fights. I can see how it can be fun if you are in the top players ranks, though.

By the way, this event made me realize that my class is at a disadvantage. I wasn’t able to extensively test it out but I would think that healers aren’t as good in 1vs1 PvP compared to the other classes.

Domination Battlefield involves capturing flags to move to a higher floor and fighting mobs that drop keys. The keys open chests that have different rewards in them. Flags can only be captured by one player so if you try to capture one that another player is also trying to get, then the two of you will have to fight. The loser gets knocked out and drops down one floor. The event was hectic and fun.

Swords of Divinity is a fun game. As a browser-based MMORPG it’s simple but has good graphics and tons of things to do. While the quests and combat are nothing unique, the daily events and minigames make the game really fun and interesting. Guilds are quite active and the players are mostly helpful and friendly to their guildmates. I can personally recommend server 12’s Seven Seas guild.

Thanks for reading and you can add me as a friend if you start playing Swords of Divinity on S12. My in-game name is AngelOlivia.

If you enjoyed this review, then why not leave a comment? I would love some feedback.