Titan Siege is an older Chinese MMO initially developed by Chendu Storm Totem Studio and published on the COG platform. The game was recently brought to the West in late 2015 (Open Beta Released – December 31st) through a publisher called GamesCo. There was no significant community surrounding the game and very little information that is readily available to learn more about it. There was also not much promotion in anticipation of its release, which resulted in the game relatively sliding under the radar for most people.

Titan Siege is a massive open-world medieval fantasy MMORPG that features more than 300 diverse creatures, 15 bustling cities, and 300+ adventurous quests. The game world brings together an amalgamation of western myths and legends from Greece, Northern Europe, Egypt, and others with rich ancient history. The game does a great job of bringing to life and blending the aesthetic of these ancient civilizations into one cohesive world. 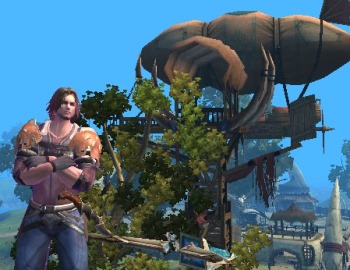 There is a great combination of various storylines that drive the riveting gameplay experience. A spirit has awakened and the anger of the Titans fuels their emergence into the human world. If you are to fend off this hoard of god-like enemies from dominating the world by force, you must begin a journey and complete a collection of thrilling quests that lead to their demise.

There is so much to do and explore in this mythical world and the game does a great job of showing it in an exciting and beautiful way. There is a real effort in the presentation with short cut-scenes that tie-in the storylines and gives a cinematic intro to certain quests, and great detailed visuals that are not only well done in static images but also in the elaborate, vibrant character animations. It brings some charm and excitement to the characters and environment that you may not have seen otherwise in a game such as this one.

In the beginning you have access to a meagre two segments of the enormous map, but as you level-up and the world starts to manifest itself, bringing lengthy plains, and endless deserts to traverse you’ll either need some companionship for the long walk or a mount to speed up the process.

In the initial phase of the game you are given your very own pet to start, but you are soon able to pick and choose your own pets. As you level up your character to certain points you open up the possibility to purchase a variety of different pets and pet skills from the store.

Mounts can be purchased in the same way as pets. You use them to either ride your way to a desired location manually, which also allows you to escape any sort of aggressive movements from packs of creatures in the wilds of the fantasy map, or you can use them as a source for fast-travel. It is an interesting twist to allow mounts to be a source of fast travel for automated practicality, but both the pets and mounts are relatively generic otherwise. 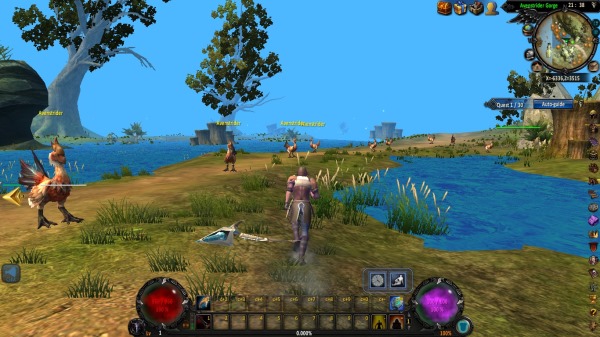 The combat is pretty typical for the MMORPG genre, using a simple right-click to engage with enemies and blending devastating moves from the skill bar with another click or use of hotkeys. These skills are the most vital aspect of the fighting system and the most exciting.
The skill tree is developed by completing quests, defeating enemies, and levelling-up to make available new abilities and points to unlock them.

Depending on the class that you choose, there are two skill groups that each yield different abilities (Ex. Dark and Light skills). Being that you are required to choose one or the other it adds some element of strategy in creating the sort of character that you ultimately want to develop. The important thing to recognize is the time that is put into developing a character’s abilities fully. It takes a significant amount of time to flesh out your character, as you are awarded a single skill point per level, which means it could take up to 15 levels to max out a particular ability.

Another part of the system includes a great amount of automation – from the auto training to auto quest guidance, and although it doesn’t take away from the game, it seems odd and somewhat cheapened to have it included. 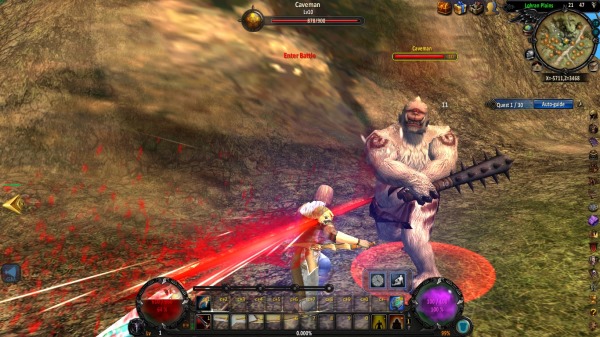 The combat system itself is not exactly what makes the fighting enjoyable but rather the creatures that change up the pace. There is enormous variety in both the appearance and the behavior of enemies that makes for a collection of exciting and unique combat experiences. There are beautiful animations that bring them to life with very fluid motion and vibrant colors.

The most fun you can have in combat is battling with the games bosses. As you progress through the game and achieve level milestones, certain bosses are unlocked for you to take on. Everything that makes the standard creatures great is even greater with each of these bosses.

Titan Siege is a decent fantasy MMORPG game that didn’t really get much exposure when it launched in North America. It is overall mostly a generic take on the genre with conventional gameplay, visuals, and story. Despite a lack of compelling major innovation, it does plenty of things quite well to make it a stellar experience.

It is a heavily focused PvP open-world that pits players against each other, but it does encourage you to engage in teamwork through choices like the Instant Friend Button, which pairs you up with a random person.

It presents its world brilliantly with well-crafted cut-scene that sow together the fabric of the storylines and cinematically displays the environment, there are elaborate animations for monsters and characters (especially when involving magic), an extensive list of skills with meaningful choices to be made, and a large variety of enemies with unique behaviors to impact combat strategies.

In summary, it is certainly not a major jump in technology, even for when it came out, nor is it a leap in the approach to MMOs, but it will surely satisfy many players of the genre as it has great polish and plenty to do.