The game WildStar takes its structure from many classic MMORPGs. Much like World of Warcraft, the game takes place in a world with two divided factions made up of several races. The setting of the game, the fictional planet, Nexus is vast, atmospheric, endearing. The attention to detail is impressive, especially for a free game.

Even after sinking hours upon hours into the game, I felt as if I had barely scratched the surface of the massive open world. Nexus is not only large, but dense with NPC’s offering tips and different versions of fetch or exterminate quests. This is one area of the game that could use some diversity. 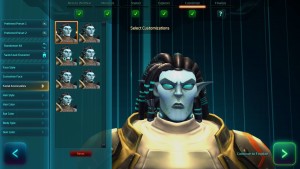 Character customization in this game is deep and detailed. After making an account you are prompted to choose from two different factions, each of which contains four different races. WildStar includes the usual range of races you might find in an MMORPG, a human race, a rock-like race, a cyborg race, etc. None of these break from the mold, but they do give you plenty of options for playstyle. Each race also has a male and a female option, so even just from a visual standpoint, there are a lot of options to make your character unique.

Once you have chosen your factor, gender, and race you can choose from a plethora of skills and abilities, falling into six different classes. The class options are familiar to the MMORPG format, you have your standard Medic, Engineer, Gunslinger, Spellslinger, Stalker, and Warrior. Again, Carbine is not breaking the mold with these choices, but they are done well and offer a decent balance in PvP play. From appearance, to skills and abilities the options for your character are almost endless. This game allows you to be insanely creative with your character customization. You really feel as if your character is yours/unique. 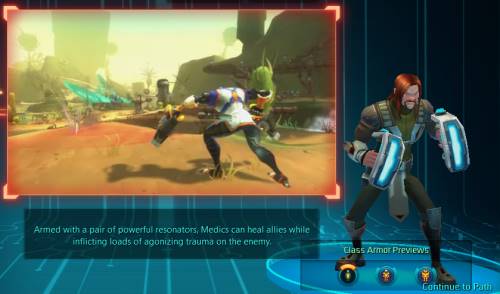 As far as audio and visual, WildStar really excels. The game features an original score with gives cutscenes and gameplay a cinematic feel. The soundtrack really adds to the game and is something that stands out about this particular MMORPG. The graphics, though a bit dated, create an immerse world filled with bright, colorful textures.

Wildstar starts out fairly simple. At the beginning you are massively overpowered, but the difficulty quickly picks up. The early levels are more tedious than challenging Around level 10, dying becomes much more common as a brief lapse in concentration can cost you a battle. 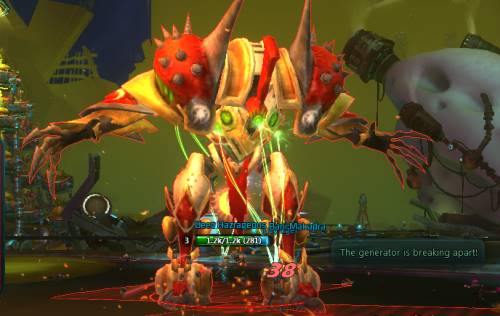 Combat is fast paced and complex without overwhelming new players. You can assign skills to only eight main hot keys, making players have to strategize a bit more about which attacks they want to be available. Enemies “telegraph” their attacks, making quick reactions a key to game play. This mechanic also helps to make the game more balanced because it allows agile, sneaky builds to anticipate and dodge attacks, however it becomes nearly useless in large forty person raids as the whole area seems to be covered by telegraphs. The large raids are epic require planning and teamwork. Though the majority of your experience will come from fetch quests and grind killing, the quests in Wildstar can keep you engaged for dozens of hours. There are so many different ways to play Wildstar from exploration to level grinding to raiding with friends, even after hours of game play I felt like I was just scratching the surface of each game mode.

PvP options vary from small batch battles, to massive 40 vs 40 battlegrounds. Wildstar offers your standard fare of cooperative game modes like capture the flag. In my opinion, this was a weaker area of the game. The classes seem less balanced as ranged builds greatly overpower melee builds. The community was not exceptional and pairing up with other players is clunky at best.

The housing system in Wildstar is a nice touch, though it is easy to forget about completely with so much other content available. You can collect various items from around Nexus and use them to customize your home or even your avatar itself.

Exploration in Wildstar is a strong suit in my opinion. Nexus is gorgeous and immerse with plenty of nooks and crannies to explore. If the scenic views and atmospheric level design is not enough, your exploration is likely to be rewarded with hidden loot, Easter eggs, and side quests. 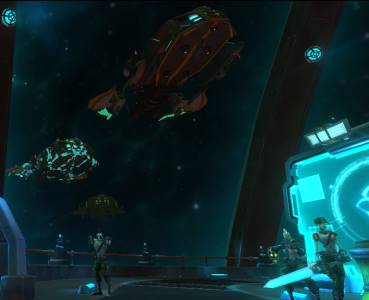 WildStar requires a bit of a commitment to get the full experience, but it does not feel like an endless grind. you can easily sink 100s of hours into this game, it feels very rewarding for the time you put invest in a long raid, or grinding to get a new ability. That being said, this is a game that needs some time to be put into it. If you are willing to learn and aren’t afraid of a little level grinding, then Wildstar offers hours upon hours of entertainment. If you are on the more casual end of the spectrum, this might not be the MMORPG for you.

Overall, this is definitely a gem of an MMORPG, but it’s not particularly casual player friendly. Veteran to the genre will like the well done traditional formula that the game follows, but new players might feel overwhelmed by the abundance of choice. Carbine is not doing anything revolutionary with this title, but it gets the basics right. You get an immerse experience, and massive amount of content for free. The game follows the traditional MMOPRG formula, but does it well. The game is captivating even though it doesn’t do much to stand out from other titles in the genre. The story/lore, combat system, and visuals are great and bugs are minimal; a great investment for seasoned MMORPG players.